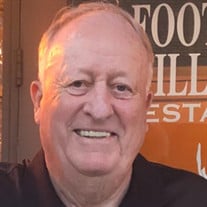 Garland Edward “Peachy” Layman, age 85, of Newport passed away Saturday, May 14, 2022. Ed worked at Detroit Gasket in Newport for 20 years. He retired from Key Safety Systems, Knoxville as a Senior Buyer. He was a local basketball referee and coach for many years. He proudly served in the United States Army at Fort Benning, GA. Ed was preceded in death by his parents, Garland Layman and Estie Layman; sister Dorothy Allen and brothers, Gene Layman, Roy McMahan, Jackie Layman, Kelly McMahan, and E.C. McMahan. Ed is survived by his wife of 61 years Judy Shoemaker Layman of Newport now residing in Knoxville, son Charley (Vicki) Layman of Knoxville and grandson Dr. Bradford Layman of Knoxville. Also, very special family members Sherry and Bryce Strange of Newport, Linda Householder of Knoxville, Nancy Layman of Newport and many very special nieces, nephews, friends and special neighbors surrounding their long-time home along the corner of Washington Avenue and 5th Street. To say that he was a fan of UT sports would be an understatement. On a daily basis, he would proudly wear is orange UT hat and other orange attire. On any given Saturday in the fall, he was sure to be in his favorite seat in Neyland Stadium loudly cheering on his Vols. Over a stretch of about 50 years he only missed 1 home football game! His other passions included keeping a beautiful yard, spending time with family members, spoiling his grand pups Fancy and Bella and vacationing, biking and hunting seashells at his favorite Wild Dunes Resort in South Carolina. A graveside service will be held Wednesday, May 18, 2022 at 1pm, Union Cemetery and officiated by Rev. John Hale and Rev. David Garrett. Manes Funeral Home is in charge. In lieu of flowers, please feel free to make donations to the First Church of the Nazarene, P.O. Box 292, Newport, TN 37822, where he was a member for many years. Family and friends may sign the guest register online at www.manesfuneralhome.com. Arrangements by Manes Funeral Home.

Garland Edward &#8220;Peachy&#8221; Layman, age 85, of Newport passed away Saturday, May 14, 2022. Ed worked at Detroit Gasket in Newport for 20 years. He retired from Key Safety Systems, Knoxville as a Senior Buyer. He was a local basketball... View Obituary & Service Information

The family of Garland Edward "Peachy" Layman created this Life Tributes page to make it easy to share your memories.

Send flowers to the Layman family.