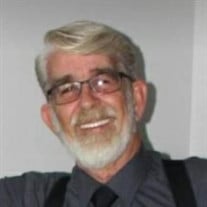 Gordon Eugene "Gene" Agnew drew his last breath Saturday, February 6, but was legally pronounced on Sunday, February 7, 2021, after a nine month battle with lung cancer that spread. Gene was born in Knoxville, Tennessee on February 18, 1948, and became a Christian on May 6, 1976. An Army veteran who served in Vietnam, he had a 25-year career with the US Postal Service in Saint Paul, Minnesota. His passions included music, cars, maintaining his land, and working with his hands. Gene never met a stranger and wasn't shy about voicing his opinions. He was someone good. His dream was to come home to the Great Smoky Mountains of East Tennessee, a goal he reached in 1993 with his wife and daughter after a year in Guntown, Mississippi. Gene was preceded in death by parents Joseph L. Sr. and Shirley Stokes Agnew of Guntown, Mississippi and brother Joseph L. Agnew, Jr. of Fox Island, Washington. He is survived by wife Helen "Holly" Belenski Agnew and daughter Sharon Tennessee Agnew of Sevier County, Tennessee; sons Gene Roy (Lisa Wade) Agnew of Palmer, Alaska and Wesley Kane (Sonia) Agnew of Bradenton, Florida; niece April Beth Agnew of Bellingham, Washington; grandchildren Tara Schmidt, Jake Agnew, Jules Agnew, and Ayla Agnew; great-niece Ariana Agnew; and great-nephew Jace Berumen-Agnew. He will be especially missed by his German Shepherd, Boston. A celebration of Gene's life will be scheduled when gathering is safe. Any memorials can be made out to Quilts of Valor Foundation, item line: Parrottsville Quilt Guild QOV/GEA and send c/o Sheilah Strobel, 148 Deer Path Way, Parrottsville, TN 37843.

The family of Gordon Eugene "Gene" Agnew created this Life Tributes page to make it easy to share your memories.

Send flowers to the Agnew family.