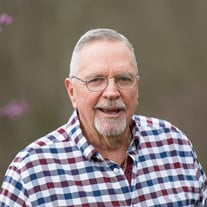 Harry Reed Moberley (October 1, 1931 – March 31, 2022) Harry Reed Moberley from Parrottsville, TN. 90 years old passed away peacefully in his home surrounded by his family after a lengthy illness. Harry is preceded in death by his parents Reed and Harriet Moberley along with his sister Barbara Tiffin. He is survived by his loving wife Michele Moberley of 56 years and his children and spouses, Page (Moberley) Ford, Mike (Carolyn) Moberley, grandchildren Reed and Megan and other relatives. Harry grew up in Coral Gables, FL and joined the Marine Corps in 1948 serving for 4 years during the Korean War. After leaving the Marine Corps, he worked for his father at Modern Printing Co. And in 1965, Harry and Michele decided to start their own printing and publishing company in St. Petersburg, FL (Moberley Offset Printing). Harry and his family relocated to Parrottsville, TN in 1973, bought a farm and started a Grade A dairy while working part-time for the Postal Service in Parrottsville. In his career he was assigned to Post Offices in Mooresburg, Greeneville, Knoxville and Newport. He finished his 22 year career as Postmaster of the Parrottsville Post Office retiring in July 1992. In 1995 Harry developed the beautiful subdivision “Edenwood Country Estates” in Parrottsville, TN where he and his wife (Michele) built their forever home overlooking the scenic Smoky Mountains. Harry had the gift of gab and always made people laugh and he was willing to help those in need. He enjoyed traveling, boating, farming, gardening, the mountains, (red car rides) and was an avid Tennessee VOL fan. A special thank you to Jeff, Garrett and Brittany and all of the staff at Amedisys for their support and comfort care. Per request, in lieu of flowers, please donate to the Parrottsville Quilters Guild or the Parrottsville Volunteer Fire Department. The family will receive friends from 2:00 pm – 4:00 pm Saturday April 9, 2022 with memorial service following at 4:00 pm in Manes Funeral Home Chapel with Rev. Mike Hensley officiating. Family and friends may sign the guest register online at: www.manesfuneralhome.com. Arrangements by Manes Funeral Home.

Harry Reed Moberley (October 1, 1931 &#8211; March 31, 2022) Harry Reed Moberley from Parrottsville, TN. 90 years old passed away peacefully in his home surrounded by his family after a lengthy illness. Harry is preceded in death by his parents... View Obituary & Service Information

The family of Harry Reed Moberley created this Life Tributes page to make it easy to share your memories.

Send flowers to the Moberley family.