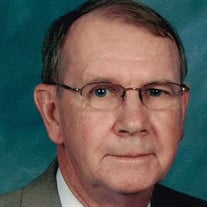 Jack Auldon Parks, 83 of Parrottsville passed away, March 22, 2022, after a long battle with cancer. He was a member of First Baptist Church, Newport. After graduating from high school, he worked for the FBI as a fingerprint classifier in Washington... View Obituary & Service Information

The family of Jack Auldon Parks created this Life Tributes page to make it easy to share your memories.

Send flowers to the Parks family.