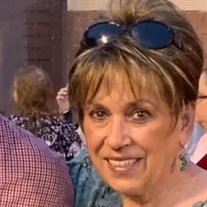 Janice Lynn Buda, age 71, went to be with her heavenly father on Saturday, April 10, 2021. Janice is preceded in death by her parent, William C. Buda and Christina Stephens Buda (Newport), grandparents, Gus and Zoitsa Stephens (Greeneville, TN) and Alec and Zella Buda (Newport) Aunts and Uncles, William R. Darden and Lucille Darden (Johnson City) and Charles “Z” Buda and Annette Buda (Pigeon Forge). Janice is survived by her sons, Andy Tippitt (Maryville) and Stephen Tippitt and his wife Valerie Buckner Tippitt (Knoxville), grandchildren, Kelcey and Cade Tippitt (Maryville), brother, William C. Buda, Jr. and his wife Kay Buda (Newport), niece, Morgan Buda and her wife Erin Dush (Minneapolis, MN), cousins, William R. Darden and his wife Caroline Darden (Johnson City) and Stephen Matson Darden and his wife Anne Darden (Johnson City), former husband, Joe Tippitt (Camden, TN), special friend and dog Chloe, and too many devoted and loyal friends to name. Janice was the former Director of Radiology at Cocke County Hospital for nearly a quarter century. Prior to that, she was the Manager of Regency Health Care Center in Newport. She had recently been substitute teaching in Cocke County. Janice was a graduate of Cocke County High School in 1968 where she was voted Best All Around and Most Dependable. She was a member of the Homecoming Court and Vice President of the Keyettes. She also played clarinet in the band where she won the John Phillip Sousa Award. Janice earned her first B.S. degree from Virginia Intermont College in English. She earned another B.S. degree in Human and Health Sciences from Western Michigan University. Janice always demonstrated kindness and generosity to everyone she knew. She devoted countless volunteer hours to charities and organizations all over the state. She was named the March of Dimes Mothers March Chairman from 1978. She headed the “Wheels for Life” for St. Jude Children’s Hospital in 1979-1981 in Newport. She was the President of the Clifton Club and December 1st was proclaimed “Janice Tippitt Day” in the City of Newport in 1980. She was a huge supporter of the Isaiah House and Steal Away Home Animal Rescue. She was also a Team Mother of several of Andy and Steve’s sports teams. Janice was a contributor to The Newport Plain Talk’s “The Golden Couple”, “The Bell Ringer”, and “Cocke County Cuisine.” Janice was an involved member of The Episcopal Church of the Annunciation for decades where she was a server on the Church Vestry and Women’s Alter Guild. The family will be receiving friends from 11:00 am – 2:00 pm on Saturday April 17th at The Episcopal Church of the Annunciation in Newport. A small Celebration of Life Service will follow at 2:00 pm at the church for family and close friends. In lieu of flowers Janice requested donations be sent to the Episcopal Church of the Annunciation, 304 Cosby Highway, Newport, TN 37821 or the Newport Animal Shelter. Per CDC guidelines, please practice safe social distancing and face masks are recommended. Family and friends may sign the guest register online at: www.manesfuneralhome.com. Arrangements by Manes Funeral Home.

The family of Janice Lynn Buda created this Life Tributes page to make it easy to share your memories.

Janice Lynn Buda, age 71, went to be with her heavenly father...

Send flowers to the Buda family.