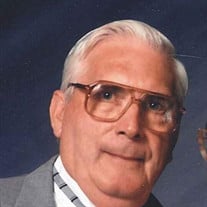 John E. Francis went to a wonderful homecoming on Saturday, November 28, 2020 where he was welcomed by his Lord, his wife, and many family and friends. John was born on January 24, 1936 in Jefferson County, Tennessee to Jack and Maggie Clevenger Francis. He grew up near uncles, aunts, and cousins as they all lived on his grandfather and namesake John Edward (Ned) Francis’s farm. He attended Rainwater School, a few miles from the farm, where he was taught by his beloved teacher, Miss Gypsy Rainwater. She paid him to carry water from a nearby creek and to keep the fire going in the wood stove during the winter at the little school. He also attended Chestnut Hill Elementary. As a child, he was excited to see the rolling store come to the house and was fascinated with all the items in the store, which was a sign of things to come later in his life. He learned to drive after the family bought their first car from the proceeds of selling some cattle, and once he had a driver’s license, he began helping his uncle, Tossie Clevenger, haul fruits and vegetables to sell. He met his wife, Jeanette Jones, at a tent revival being held in Newport by Rev. Joe Bullard, and he married the couple at his home in Knoxville on July 9, 1955. Although John worked at several local factories, he found he really liked being a truck driver and delivering groceries. He worked for Hugh Taylor at Taylor Grocery Company as a driver delivering groceries to various businesses in several counties. Later, he went to work at Mohawk Milling Company first as a driver and then later as a salesman. During these years, he developed many lifelong friendships with his co-workers. In 1978, he and Jeanette started Francis Produce, a wholesale grocery and produce business, which they operated until their retirement in October 2000. The business motto was “Known for Quality and Dependable Service,” which we think his customers would agree that John lived up to that motto. During this same time, he also owned and operated the Enka bus line. In retirement he and Jeanette traveled some, but most days he was content to have a good meal and then sit on the front porch with Jeanette in their rocking chairs and just talk. He and Jeanette also loved and appreciated visits from good friends Bob Worley and Emogene Buckner. As a Baptist, John loved southern gospel music, especially The Inspirations, and for many years attended Mull’s Singings in Knoxville. He also owned a couple of antique trucks that he liked to drive from time to time, and he loved Jeanette’s good country cooking, homemade ice cream, watermelon, and Zagnut candy bars. He is preceded in death by his wife, Jeanette; parents, Jack and Maggie; sister, Mary Norwood; and son-in-law, Benny Conley. He is survived by daughter, Joyce; sons Mike (Connie) and Mark; several grandchildren and great grandchildren; and sister, Anna Mae Abbott. The family would like to thank family member, Wilma Tipton, for all her help and support, as well as Caris Hospice and caregivers Holly Murphy and her team: Missy, Terri, Teresa, Heather, Katie, Melinda, Robin, Jennifer, and Denise. Guests may call at their convenience between the hours of 10:00 am and 4:00 pm on Monday, November 30, 2020. Graveside service will be held on Wednesday, December 2, 2020, at 2:00 pm, in Union Cemetery with Rev. Dennis Strange officiating. Family and friends may sign the guest register on line at: www.manesfuneralhome.com. Per CDC please practice safe social distancing and masks are highly recommended. Arrangements by Manes Funeral Home.

John E. Francis went to a wonderful homecoming on Saturday, November 28, 2020 where he was welcomed by his Lord, his wife, and many family and friends. John was born on January 24, 1936 in Jefferson County, Tennessee to Jack and Maggie Clevenger... View Obituary & Service Information

The family of John E. Francis created this Life Tributes page to make it easy to share your memories.

Send flowers to the Francis family.