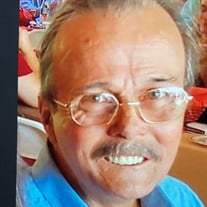 John Ray “Johnny Ray” Williams, 68 of Hartford, Tennessee, died on Monday, February 7th, at his sister Rita’s home in Millville after an extended illness. Johnny Ray was a Lance Corporal in the United States Marine Corps serving from 1972 until 1974. He then transferred to the Marine Corps Reserve serving from 1974 until 1978. He was a carpenter, handyman, and owned and operated his own business in Hartford prior to becoming disabled. Johnny Ray loved the outdoors and enjoyed fishing. He also enjoyed country music and played the guitar. Johnny Ray loved life, all his friends and family. He will be remembered as the one that would do anything for anybody if help was needed. Go rest high on the Mountain, son, your work on Earth is done. He is survived by: son, John Ray Williams Jr.; daughters. Bobbi Condell, Michelle Hansen, Melissa Hundt, and Amber Pennington; brothers, Leon Williams, Michael Williams, and David Williams; sisters, Rita Dowd, Geri Vurganov, Erma Walters, Eileen Baer, and Judy Paolillo; 12 grandchildren; Johnny Ray was pre-deceased by; father, John Williams; mother, Louetta Ludlam; step father, Harold Ludlam; sisters, Emma Jean Sofield and Elizabeth Mooney; brother, Robert Williams. Visitation will be held on Thursday (2/10/22) from 2-3 pm at the Rocap Shannon Memorial Funeral Home of Millville. Graveside services will be held on Tuesday (2/15/22) at 1 pm in the Shelton Family Cemetery in Hartford, Tennessee. Written condolences can be sent to: [email protected] or visit our web site at: www.rocapshannon.com. Family and friends may also sign online at: www.manesfuneralhome.com.

The family of John Ray "Johnny Ray" Williams created this Life Tributes page to make it easy to share your memories.

Send flowers to the Williams family.