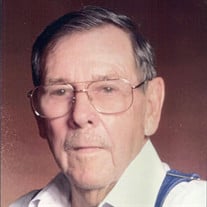 John C. (JC) Scott departed this world for his home in heaven Thursday, May 19th, 2022 at the age of 95. John was a lifetime resident of Cocke County. He was proceeded in death by his children Helen (Penny) England, son Mark Scott, parents,... View Obituary & Service Information

The family of John C. (JC) Scott created this Life Tributes page to make it easy to share your memories.

John C. (JC) Scott departed this world for his home in heaven...

Send flowers to the Scott family.