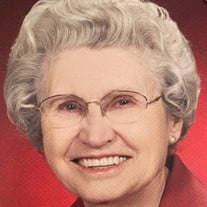 Louise Stone, age 97, of Chattanooga, Tennessee went to be with her Savior on March 22. She attended Fowler&#8217;s Grove one room school house and graduated from Parrottsville, high school. Louise moved to Asheville, North Carolina but eventually... View Obituary & Service Information

The family of Louise R. Stone created this Life Tributes page to make it easy to share your memories.

Louise Stone, age 97, of Chattanooga, Tennessee went to be with...

Send flowers to the Stone family.