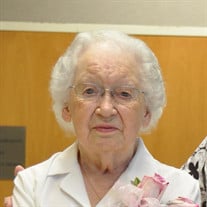 Mildred Cooper Carrell, of Newport, age 100, died Wednesday, December 30, 2020, after a period of declining health. She was born in Ela, North Carolina, a small community near Bryson City, oldest of three children of John Brabson and Rhoda (Sisk) Cooper. Her father ran a gristmill and farmed. Following her father’s death, her mother, a Cocke County native, brought her children back to Newport and moved in with her parents Will and Lou (Hannon) Sisk in a home at the corner of First Street and Lincoln Avenue. She was a 1938 graduate of Cocke County High School, one of the school’s oldest alumni, and later attended Draughons Business College in Knoxville. On October 5, 1940, she married Clifford Carrell, and in 1942 went to work for Newport Utilities, retiring in 1982. She was a charter member of English Creek Baptist Church and attended services as long as her health permitted. She was preceded in death by her husband, her parents, her sister Ruth (Hugh ‘Hootie’) Holt, her brother John Junior (Helen) Cooper, and her son-in-law Earl Edmonds. She is survived by her daughter Ila Ruth Edmonds of Newport, two grandsons Chris (Christy) Edmonds of Newport and Jeff (Rachel) Edmonds of Knoxville, and two beloved great-grandchildren Emily Edmonds of Newport and Joseph Edmonds of Knoxville. Additional survivors include several nieces, nephews, and cousins, as well as special friends Betty Bryant, Bill and Beverly Chambers, Carolyn Lindsey, and Earl and Inez Phillips. The family would like to thank the staffs of Newport Convalescent Center and Smoky Mountain Home Health and Hospice and especially special caregiver Tina Kehrieg. A private graveside service and interment was held in Union Cemetery. Memorial gifts may be sent to English Creek Baptist Church, P.O. Box 1110, Newport, TN 37822. Family and friends may sign the guest register online at www.manesfuneralhome.com. Arrangements by Manes Funeral Home

The family of Mildred Carrell created this Life Tributes page to make it easy to share your memories.

Send flowers to the Carrell family.