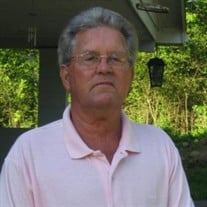 Robert “RT” Lawson, age 90, was called to his heavenly home on Friday, December 3, 2021. A lifelong resident of Cocke County, he was born November 12, 1931 in Bridgeport, TN. As a young man, he joined the United States Navy and was aboard the USS Oriskany when it made its maiden voyage around the horn en route to join the skirmish during the Korean War. He went on to join the Merchant Marines also. Following his military service, he returned to Cocke County, where he started his family and several career endeavors. Those endeavors included a 12 year term as county property assessor, owner of Lawson Market on Hwy 411 for several years, and working as a paint contractor with Junior Boley. He was also a 50 year member of the Newport Masonic Lodge (234). A faithful member of Open Door Church for many, many years. RT is preceded in death by his parents Anderson and Willa May (née Parks) Lawson, sister Ogreta Lawson, and brothers Frank Lawson, Buck Lawson, Junior Lawson, and Gene Lawson. He is survived by his wife of 65 years Joy Lawson (née Henry), sister Joyce Conway, children Diana Epley (Ronnie), Robert Lawson (Atidza), Tim Lawson (Tammy), and Terry Lawson (Heather), several grandchildren, great-grandchildren, and other family and friends. The family will receive friends from 4:00 pm – 7:00 pm Wednesday, December 8, 2021 at Open Door Church with funeral service to follow at 7:00 pm with Rev. Jerry Raines officiating. Burial will be at 1:00 pm, Thursday, December 9, 2021 in the Open Door Cemetery. Family and friends may sign the guest register online at www.manesfuneralhome.com. Arrangements by Manes Funeral Home.

The family of Robert "RT" T. Lawson created this Life Tributes page to make it easy to share your memories.

Send flowers to the Lawson family.