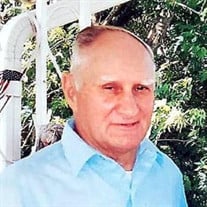 Robert Norman Watson, 89, currently residing in Oxford NC, a long-time resident of Durham County, retiring in Cosby Tennessee before returning to North Carolina due to ailing health passed on July 9th, 2021. Born March 28, 1932, to Robert Milton Watson and Iva Pauline Cates in Durham County, NC. He is preceded in death by his father and mother, love of his life, wife Eula Mae Jenkins, his infant son Norman Lynn Watson, brothers Thomas Watson, Cecil Watson, sister Nan Cribb. Mr. Watson is survived by his four sons, Robert M. “Blue” Watson (wife Sherri), Bobby L. Watson, Toney L. Watson (wife Wendy) and David L. Watson. Grandchildren; Robert Watson, Jr. (wife Rachel), Michael Watson, Megan Cash (husband Jonathan), Jennifer Cisneros (husband Alex), Tonya Watson, Toney R. Watson, Brandon Watson, and Justin Watson. Several loving great-grandchildren and sister Barbara. Mr. Watson (Batman) retired from the City of Durham with over 20 years of service. He loved working on cars, racing and was an avid Ford fan. His love of cars, was passed along to his sons and grandsons who kept the tradition ongoing. He attended East Roxboro Church of God. Robert and Eula loved the mountains of Tennessee where they met and begin to raise their family before moving to North Carolina. He missed his wife of 57 years dearly. He loved spending his last few years around his family, children, grandchildren and great grandchildren. The family will have a visitation from 6 to 8 p. m. Monday July 12, 2021 at Hudson Funeral Home in Durham, NC and other times at the home of Blue and Sherri Watson. There will be a one hour of visitation from 11 a.m. to 12 p.m. on July 14, 2021 at Manes Funeral Home in Newport, TN, followed by a graveside service at 1 p.m. beside his beloved wife at Webb’s Creek Cemetery in Gatlinburg, TN. In lieu of flowers donations can be made to Heartland Hospice at 4505 Falls of Neuse Road, Suite 650 Raleigh, NC 27609-2523. The family would like to thank the Heartland Hospice center for their care, the nurses and healthcare workers whom assisted him, his daughter in law Sherri for her extended care of him through his battle of dementia along with his family.

The family of Robert "Batman" Watson created this Life Tributes page to make it easy to share your memories.

Send flowers to the Watson family.