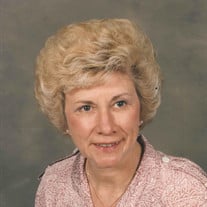 The gates of heaven opened wide on 7/9/21 to welcome home Ruby Dean Allen, aka Ruby Woody, aka Ruby Marshall. She was welcomed by her first husband, Samuel Marshall, who passed on in the early nineties, her parents Vern and Mary Woody of Del Rio, and brothers Leroy, Lonnie, Lester, and sister Shirley who passed before her She left behind her husband of 25 years, Arlen Allen of Dandridge, her son, Ted Vearl Marshall of Newport, and her grandson Adam Grant Marshall, who lives in Japan and teaches English. She is also survived by brothers Lewis Woody, of DeBary, Fla. and Wiley Woody of Long Creek. Also suffering her passing are Arlen’s children, Lisa, Steve, and Randall. She had a world of friends whom she will await in the kingdom of heaven. She was born in a log cabin up on Bull Mountain on the Midway side. Her brother, Lester, once took her other brother, Lewis, and me up there. It took a four wheel drive, a chainsaw, and a mile of walking to get to it. I recall the kitchen addition to the cabin covered for insulation inside with newspaper clippings from the second world war. Also remaining were the cornfield and corn crib where baby Shirley was laid while older siblings worked the corn. Her father, I am told, once painted an old mule brown, then sold it. The buyer complained after the rain washed the paint off and my grandfather stood his ground saying that, obviously, that was not the mule that was sold. Ruby had a long career. She moved, after working in a Greeneville, Tn. Café, to Cleveland, Ohio, in the fifties, to get work. After she met and married Sam, who grew up in Bybee, and worked on the shipping docks, she developed her own Sarah Coventry door to door selling business. When she and Sam came back to Newport, she used her business experience to land a job in McKinney Sutton’s County Court Clerk’s office. Later, she worked at City Hall under Gene Layman, City Recorder. She was known for cooking biscuits and gravy for her staff and for the police department that was officed in the same building. After she retired from that, her sole business was taking care of my father, Sam Marshall, who was on dialysis in the earlier days of treatment. They gave him seven years to live, and, as a classic country boy with the mind set of “oh yeah? Watch this,” he lived 21 years, Once my father passed, Ruby could no longer endure Newport and the memories that it constantly brought. She got a job at Volunteer Chevrolet in Sevierville and worked till she had a mild stoke in the late two thousands. She was “retired” by her bosses. Since then, she has concentrated on taking care of her husband, who is on dialysis, and her friends, so many of which I cannot begin to name. She is gone now. Her spirit remains, teaching us all about sharing with each other and taking care of each other. She did so, as a mother and a wife, and as friend to so many. Bye bye, mom. I’m sure heaven knows what an angel they’ve received. Funeral services will be held 7 pm Wednesday July 14, 2021 in Manes Funeral Home Chapel. Receiving of friends will be from 5-7 pm on Wednesday prior to the services. Entombment will be on Thursday July 15, 2021 at 11 am in the Resthaven Memorial Mausoleum. Arrangements by Manes Funeral Home.

The gates of heaven opened wide on 7/9/21 to welcome home Ruby Dean Allen, aka Ruby Woody, aka Ruby Marshall. She was welcomed by her first husband, Samuel Marshall, who passed on in the early nineties, her parents Vern and Mary Woody of Del... View Obituary & Service Information

The family of Ruby Dean Allen created this Life Tributes page to make it easy to share your memories.

Send flowers to the Allen family.