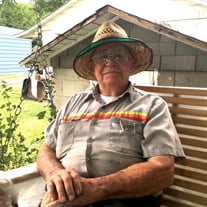 Stanley Clee Allison passed away quietly in his home on February 7, after a short illness. He was 97 and enjoyed good health, never being hospitalized until his last weeks. He is survived by his wife of 78 years, Violet Gregg Allison; daughters Sharon Allison and Jerri Lynn Allison; and sister: Elaine Freshour. Preceding him in death were his father, Charlie Allison; mother, Myrtle Gregg Allison Freshour; infant daughter, Janet Kaye Allison; brothers: Charles Allison (Carolyn) (Cleveland, Ohio), Frank Allison (Flossie), Jeter Freshour, Ralph Freshour, Johnny Freshour and Carl Freshour; sisters: Ina Mae Allison Brady and Marie Freshour Ford. Of Scottish ancestry, Stanley was born November 12, 1924 in Parrottsville, Tennessee. He attended local one-room schools, including O'Dell, St. Tide and Point Pleasant. As the oldest of ten children, he left school at age 14 to help his mother provide for the family. In addition to plowing and hoeing corn for 25¢ a day, he would do any other work he could find. To make a living in the 1940's, he and Lynn Ealy plowed gardens with their trusty team of mules, Red and Rhodie. In the early 1950's Stanley worked for Red Baxter, delivering ice and the coal he would travel to Louisville, KY, to pick up. Stanley's true talent and passion, however, were discovered when Lawrence Gregg – a neighbor and later, his brother-in-law – took Stanley under his wing, letting him do some work at his garage on Clear Creek Road. It was evident early on that Stanley was gifted with a knack for mechanics. This affinity for the inner workings of motors would serve him well throughout his life, from providing for his family, to becoming a legend in the local racing community. Stanley and Lawrence began building race cars, including many that were driven by L.D. Ottinger on a dirt track in Newport. At that time, the area garages had a baseball league, and Stanley played for the Lawrence Gregg Garage team. In 1962, Stanley began his “off the track” career, working for Polly Parrott Garage as a mechanic. Later he joined Kickliter Ford, where he served for 27 years as Service Manager, retiring in 1989. During the 60's, 70's and 80's Stanley remained involved in racing, building cars from the ground up. His team raced frequently at Bulls Gap, Bristol, Lowe's Speedway in Charlotte, Daytona, Smoky Mountain Raceway in Maryville, Newport Speedway and many others. After retiring from Ford, Stanley continued to build custom engines for a variety of clients in the racing industry. At Newport Raceway, he served for many years judging whether engines met specifications when there were protests. Though his business slowed as years passed, Stanley continued working on engines until closing his shop in 2016. Retiring “for good” at the age of 90-plus, he could be found relaxing in his porch swing or taking drives around the countryside. In his distinctive straw hat, Stanley was a familiar figure 'around town,' especially on his daily trips to Walmart, where he would invariably encounter friends and neighbors he'd stop to chat with. In earlier years, Stanley enjoyed quail hunting with close friend Charlie Kickliter and their loyal bird dogs, brothers Red and Brownie. Stanley had a lifelong love of nature. He spent many summers raising a bountiful vegetable garden, with plenty to give away to neighbors and friends. He loved nothing more than to take a box of his prized tomatoes to the “girls at US Bank.” Stanley had a sharp wit and was a good neighbor. As he said so often, “There's nothing like good friends.” The Allison family would like give special thanks to the Smokey Mountain Home Health nurses, Chelsea, Carla, Amanda and Julie, who did a wonderful job taking care of Stanley. Also, much appreciation to Stanley's longtime physician, Dr. David Kickliter. A visitation is scheduled for Saturday, February 12, from 4:00 – 7:00 pm, at Manes Funeral Home. A graveside service will be held at Union Cemetery on Sunday, February 13, at 2:00 pm, with Ben Watts and Zane Stuart officiating. In lieu of flowers, please make donations to East Tennessee PBS or the Newport Animal Shelter. Family and friends may sign the guest register online at: www.manesfuenralhome.com. Arrangements by Manes Funeral Home.

Stanley Clee Allison passed away quietly in his home on February 7, after a short illness. He was 97 and enjoyed good health, never being hospitalized until his last weeks. He is survived by his wife of 78 years, Violet Gregg Allison; daughters... View Obituary & Service Information

The family of Stanley Clee Allison created this Life Tributes page to make it easy to share your memories.

Stanley Clee Allison passed away quietly in his home on February...

Send flowers to the Allison family.