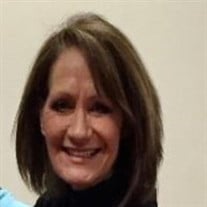 On Monday, January 3, 2022, Teresa Jane Thomas, loving mother of two children and five grandchildren, passed away at age 64 in her home. Teresa was born on August 16, 1957 in Newport, TN to William Edward and Janette (Simms) Ray. She graduated from Cocke County High School in 1975. She received her Bachelor’s degree in education from the University of Tennessee in Knoxville in 1979. One of her proudest accomplishments was serving as a majorette for the Pride of the Southland marching band for 4 years while at UT. Teresa taught English in Knoxville until becoming a homemaker after the birth of her two children, Lindsey and Barrett. If you knew her well, you know she spoke English loosely. She worked for several years at Bush’s Beans in Chestnut Hill, TN, followed by part time work at Goodwill in Newport. She was an active member of Providence Baptist church in Newport, TN. Teresa loved her children very much and family meant the world to her. She loved vacations to the beach and family gatherings. Teresa’s passion was her grandchildren, that she loved dearly. Her nightly routine always concluded with a coffee mug of ice cream and lounging with her dog, Willie, and cat, Jade. She always looked forward to Saturday night filet and crab legs at her dear friend’s house, Scott Williamson. She was always there for a shoulder to lean on and calming voice to talk to. She always lit up the room and had an infectious smile. She was one of the easiest people to talk to. Teresa was preceded in death by her father, William Edward Ray, and her mother, Janette Ray. She is survived by her daughter Lindsey and Eric Hildebrand, her two children, Cole and Layla, her son Barrett and Sasha Thomas, his three children Giavanna, Lilianna, and Isabella. Her brother Glenn and Sonya Ray, their children, Meghan (daughter Ava), Lauren (Son Easton and daughter Sophia), Austyn, and Tyler (daughter Memphis) and her sister Kay and Tony Funderburg, her two daughters, Kasey and Ashton, and several cousins and extended family. A burial service will be held on Saturday, January 8th, 2022 at the Union Cemetery in Newport a 2 o’clock p.m. Flowers can be sent to Manes Funeral Home at 363 East Main Street, Newport TN 37821. Family and friends may sign the guest register online at: www.manesfuneralhome.com. Arrangements by Manes Funeral Home.

On Monday, January 3, 2022, Teresa Jane Thomas, loving mother of two children and five grandchildren, passed away at age 64 in her home. Teresa was born on August 16, 1957 in Newport, TN to William Edward and Janette (Simms) Ray. She graduated... View Obituary & Service Information

The family of Teresa Thomas created this Life Tributes page to make it easy to share your memories.

Send flowers to the Thomas family.