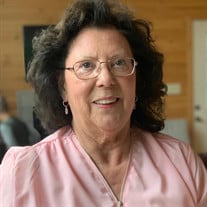 Terry Jean Dyer Otherwise known as mum, ma, mother, depending which son you ask, passed into God’s loving arms on this 7th day of October 2021 at her home in Newport, TN. Terry was born in Farmington, Maine on June 25th, 1955. She grew up in Bethel, Maine and spent her married life in Mechanic Falls, then Fayette where she spent over a decade until 2002 when they relocated to Kentucky, before retiring in 2018 with her husband of 36 years, in the Smoky Mountains of East Tennessee. She is preceded in death by her parents Carmond and Avis Moore and brother Brian Moore. Terry is survived by a large loving family, husband Dale Dyer, 3 sons Brandon, Kasey, Anthony Moore and wife Kelly. 3 Sisters Brenda Gurney, Cheryl Plourde, Dale Berry. 2-Step daughters, Karen Lockwood (John) and Rachel McKenzie (Chris). 5-Grandchildren, Brian Moore, Billy Martin (Mariah), Hannah Martin, Jordan McKenzie, and of course you can’t forget he apple of her eye grandson Parker Moore. 3-Great grandchildren Konner, Tali, and Rosalie Terry attended Telstar High School and attended the University of Maine Augusta where she studied early childhood development. Shortly thereafter she became a CNA and did what she knew best, caring for others. She was the ultimate caregiver looking after her father and mother individually for several years prior to their passing. Simply put Terry had a heart of gold. As a true believer in the gospel of her Lord and Savior Jesus Christ, Terry never stopped preaching to those she loved or those whom she’d never met before. Her involvement in the Free Methodist church led her to a connection with mission work throughout the world as far reaching as Portugal and India. Terry led Bible Study to women’s groups, taught Sunday school, and had many Christian brothers and sisters that were dear to her heart. She always had a testimony to share at any time; one thing was for sure she was always steadfast in her faith no matter what health setbacks she had to endure. She was a lover of animals always taking in a stray cat or abandoned dog. Anyone who has met Terry knows she was truly one of a kind. Whether you remember her great big laugh, deep Maine accent, her amazing cooking (best pumpkin pie on earth), or her daily reminders to find God, one thing is for sure, your life is better having known her. We are thankful for the time we have shared together and want to take a moment to celebrate a beautiful soul. She will be deeply missed but never forgotten. A graveside service will be held in Gray Village Cemetery on Wednesday October 13th at 2:30 pm in Gray, Maine.

Terry Jean Dyer Otherwise known as mum, ma, mother, depending which son you ask, passed into God&#8217;s loving arms on this 7th day of October 2021 at her home in Newport, TN. Terry was born in Farmington, Maine on June 25th, 1955. She grew... View Obituary & Service Information

The family of Terry Jean Dyer created this Life Tributes page to make it easy to share your memories.

Send flowers to the Dyer family.