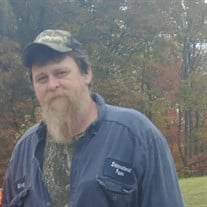 Wayney Velt Ivy went to his heavenly home on Monday, August 23, 2021 after battling COVID Pneumonia at Newport Medical Center. Wayney was a longtime maintenance technician at International Paper in Morristown. He enjoyed tinkering on old tractors and trucks, growing a garden, and hunting with his son, Isaiah. He loved to give back to his family and share the wealth of his garden with his community in Edwina. He loved being a Papaw to Gracie and nothing made him happier than showing off new pictures or talking about what new thing she had learned that day. Wayney was an excellent cook and could prepare some of the best dishes you’ve ever tried. He was a hard worker who always provided for his family. Wayney V. Ivy was predeceased by his sister, Vida Ivy Bell, father, Bobby Wayne Ivy, grandparents, Hubert and Candas Lavada Crum Ball, grandparents, Roosevelt and Martha Ada Cody Ivy, and favorite dog, Oscar. He is survived by his son and best friend, Isaiah A. Ivy, daughter-in-law, Kaitlyn Ivy, and his pride and joy, his granddaughter, Gracelynn June Ivy. He is also survived by his mother, Vida Roella Ball Ivy, sister, Waynella Ivy Large and her husband, Tommy, brother, Willie B. Ivy and his wife, Angie, brother-in-law, John A. Bell, aunt, uncle and cousins, Huberta and Garland Hannah, Stephen (Karen) and Nathan (Michelle). He is additionally survived by nephews, Scotty Large, John Luke Bell, and Spencer Shaver, and nieces, Meredith Ivy Bell and Emerald Loveday. At Wayney’s request, there will be no receiving of friends or funeral services. In lieu of flowers, the family will accept cards of condolence at 1221 Piney Mountain Road, Newport, TN 37821. Family and friends may sign the guest register online at: manesfuneralhome.com. Arrangements by Manes Funeral Home.

The family of Wayney Velt Ivy created this Life Tributes page to make it easy to share your memories.

Send flowers to the Ivy family.